Photo, above: It is now obvious why so many refer to Ilhan Omar as an asshole. Cover up, woman!

Socialist strategy: “Hey, let’s tell everyone all their debts are forgiven because coronavirus. Capitalism will collapse, socialism will step in, and we will finally have our hands around the scrawny necks of all the gross, unwashed hicks in flyover country. MAGA, my ass!”

The bluest of nocturnal emissions is happening before our very eyes and there doesn’t appear to be much we can do about it. President Trump has called the manufactured crisis a hoax from the jump, yet is obliged to lead the way into a world without civil liberties, lest he be blamed for every death from COVID-19 and be drummed out of office by his haters on the left, all giddy with their newfound weapon and the anticipation of using it as a club to beat Trump out of the White House. They do love them some coronavirus!

Trending: VIDEO: Further evidence and corroboration that Chelsea in not Bill Clinton’s biological daughter. Guess who the real dad is.

Now, America-hating Democrats are coaching their gullible followers to stop paying their bills, using COVID-19 as an excuse, to hasten the impending economic collapse that looms larger with every day that our lifeless economy is in lockdown.

Minnesota congressfraud Ilhan Omar, so respectful of American law that she married her brother, (not kidding), is openly declaring that “we need to cancel rent until this crisis is over” (i.e, forever).

Not exactly an economic Einstein, Omar has nary a clue of what once drove American individual and collective prosperity (profit), which is perfect from a socialist perspective as her mouthbreating devotees are just as clueless.

We should cancel your pay until the crisis is over, parasite! Tell your ex-husband, I mean brother (pardon my redundancy), to pay your rent. Your economic ignorance makes the voters of Minneapolis look like morons for sending you to Washington! 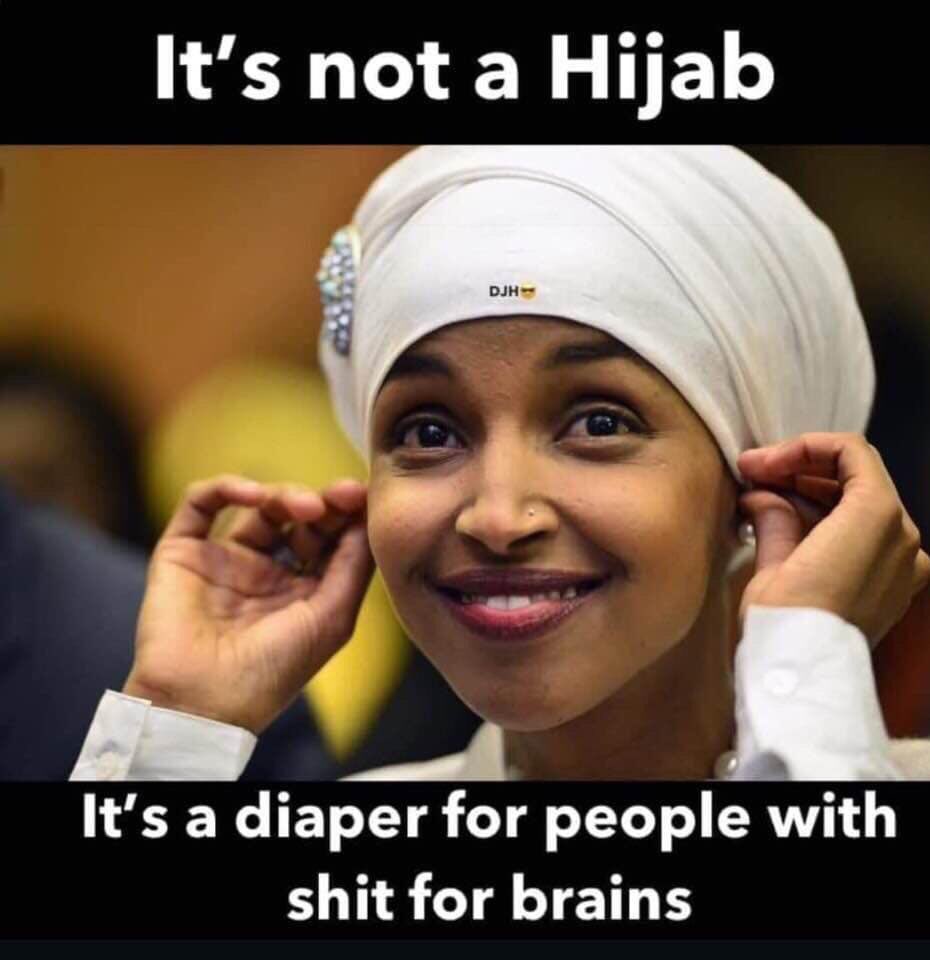 One particularly terrifying consequence of the Chinese Bat Soup Virus that is not yet getting the attention it deserves is how this situation is making already stupid liberals even dumber, especially when they sound off about economics. In the wake of this pandemic, we’ve been subjected to a series of mind-numbing insights from the pinko blue check brain trust that reaffirms the clichéd but true observation that our elite is anything but elite. Leave it to our liberal betters to take a bad situation and seek to make it exponentially worse.

For example, Sally Kohn – oh, you know where this is going – offered an astonishing observation just as the Democrats were obstructing the vital relief our small businesses desperately need:

“I’m really tired of reading how business owners are “forced” to layoff workers. No one made them do that. They *chose* to do that. Not saying it isn’t a hard choice, during a hard time, but to say they were *forced* obscures their agency AND casts owners/CEOs as the victims.”

If that hasn’t plunged your IQ to new depths, consider ever-dumb Congresswoman Ilhan Omar (D-Minnesota), who tweeted out this brainstorm:

“We need to cancel rent until this crisis is over.”

Wow. Her economics advice is even worse than her relationship advice.

Okay, it seems like you would not have to explain this to allegedly educated people, but apparently there are still some people who need a lesson in Economics 101. Since I actually own a business, perhaps I have a perspective that C Tier social media personalities and commie grifters could find illuminating.

Are you people stupid? What the unholy hell are you thinking? When there is no income, what do you expect a business owner to pay his employees with? IOUs? Monopoly money? Feelings?

Oh, maybe the boss of that local pizza restaurant that the cough police closed down should just go downstairs to the basement vault in his mansion, pop open the door and take out one of those dozens of big sacks with dollar signs on them that are stuffed with $100 bills and use them to meet payroll. And rent. And insurance. And supplies. And maintenance. And so on. And so on. And so on.

Because that whole thing about cash flow? No, it’s not a thing. It’s a myth! It’s just an illusion for those tuxedo n’ top hat-sporting fatcats who run the local pet stores and such use to fool the proles into believing that there’s not some bottomless well o’ cash these tycoons can draw upon forever.

Yeah, these bigwigs are claiming they are running out of money, but Sally sees through their web of deceit! But in a way she is right – it is kind of a choice. Of course, the choice is bankruptcy or layoffs. And either way, those employees are out of a job.

But the real tragedy would be if people might see “owners/CEOs as the victims” even though they are victims too.

You wonder if people can be this dumb and then you go on Twitter and yeah, people can absolutely be that dumb.

Or even dumber, if that’s even possible.

Really, Mrs. Brother? “Cancel rent?” I guess the president would just use that little-known “cancel rent” power buried behind all those penumbras and emanations in the Constitution. But let’s not get all wrapped up in talk of enumerated powers and stuff. Let’s look at this remarkable suggestion on its own feeble terms. “Cancel rent.” Okay, rent is canceled. Gone! No paying rent! Yah!

Wait, where did the lights go? Power’s out. Wait, you mean that miserable miser is not fronting cash for utilities anymore since you’re, you know, not paying rent? Hey, there’s a plumbing leak! You can just call…oh…awkward! Well, then you can just refuse to pay…oh, right. Well, then maybe you’ll sue your landlord for not doing the things landlords should do, though you are not doing things tenants should do. Oops. He’s bankrupt. Hear that? It’s a sad trombone.

But that’s only at the personal level. Our economy is interconnected. You don’t pay rent, so your landlord doesn’t pay his loan and all those people who used to manage the property. All those guys he used to pay, his bank, the gardener, the power company. Now, they can’t pay anyone anymore. And pretty soon no one can pay anyone anymore.

Now, we have focused on how these people are saying stupid things, and the underlying assumption is that they are stupid. But is that why they seem to be rooting for disaster? You’ve already seen progs looking on the bright side – at least this economic carnage will end up owning Drumpf!

Maybe they are simply bad people who want to impoverish you to increase their own power. Have you seen them do anything, anything at all inconsistent with that hypothesis? After all, if they can destroy capitalism by means of knocking out select pillars of the system – like by undermining selected contracts that obligate people to pay their debts – they can get to their desired endstate, and they can blame it on capitalism itself even though a system where you can’t collect rent isn’t capitalism.

Stupid? Evil? A bit of both? It doesn’t matter. What matters is that no matter how much these half-wits pipe up on Twitter, they can never, ever be allowed anything like real power lest we go full Venezuela.

And you should never go full Venezuela.