BOMBSHELL! Finally, a swamp rat, James Claptrapper, throws Barack Hussein under the bus! We did “what we were told to do by the president”

Finally, the rats are jumping ship!

Thanks to Centipede Nation for the video below and to DC Dirty Laundry for the lead on the story, which involves an interview of James Clapper by CNN’s Jim Sciutto.

Watch as Clapper nails Barack Hussein’s hide to the wall, admitting that he was only following Obama’s orders to pursue an investigation based upon what he and everyone else knew was a completely bogus dossier used fraudulently to obtain FISA warrants for an investigation into political rival Donald Trump who now happens to be the President of the United States and not a very pleased victim of the seditious conspiracy, in which Clapper was a participant, to remove him from office.

Clapper is attempting to clear himself by laying the blame on Obama, who Clapper confesses directed him to commit the crimes he committed.

Sorry, Jim, no go. You are not absolved of wrongdoing because the devil told you to do it. If Barack Hussein had ordered you to commit murder and you did it, do you believe you would be innocent? You know better. But, thanks for finally telling the truth. You may have wanted to save that, however, for a plea deal. Or, maybe that is your new strategy – let Bill Barr know right now that he can count on Jim to finger Obama under oath.

Following is Rush Limbaugh’s take on this new bombshell of a development….

RUSH: Audio sound bite number 10, this morning on CNN Jim Sciutto is talking to James Clapper, who was as corrupt as Brennan, Obama’s Director of National Intelligence. And Jim Sciutto says, “Are you concerned that Barr or Durham’s investigation will find wrongdoing and seek to punish former intelligence officials like you?”

CLAPPER: The message I’m getting from all this is, apparently what we were supposed to have done was to ignore the Russian interference, ignore the Russian meddling and the threat that it poses to us, and oh, by the way, blown off what the then commander in chief, President Obama, told us to do, which was to assemble all the reporting that we could that we had available to us —

RUSH: Wait, whoa, whoa, whoa, whoa! Stop the digital. Did you hear what he just said? He just said (imitating Clapper), “And, by the way, should we have just blown off what Obama told us to do?” Does he know what he’s just done here? Clapper on CNN today said Obama made us do it. Here, finish the bite or play it from the top, whichever you have ready to go.

CLAPPER: — and put it in one report that the president could pass on to the Congress and to the next administration. And while we’re at it, declassify as much as we possibly could to make it public, and that’s what we did.

CLAPPER: It’s kind of disconcerting now to be investigated for, you know having done our duty and done what we were told to do by the president.

RUSH: Well, so now he doesn’t like it! Now that he’s being investigated here by Barr and Durham, he says, “Hey, it was Obama. We’re just doing what Obama told us to do,” which we’ve always suspected. But I find it fascinating the way he characterizes this. (impression) “Well, uh, apparently what we were supposed to have done is — is just ignore the Russian interference.” There wasn’t any. There wasn’t any Russian interference. You can’t prove it. There wasn’t any. Don’t give me the $150,000 ad buy the Russian troll farms made on Facebook after the election.

From the beginning, the only Russian in the story was that fat ambassador who took everybody to lunch, Kislyak. Other than that, there weren’t any Russians in the story! So here comes Clapper (impression), “Are we supposed to just ignore it, uhhhh, and the threat it posed to us and, uhh, were we supposed to blow off what Obama told us to do?” See, this is such a misstatement of what went on. They concocted all of this! The Steele dossier is how they concocted all of this! Clapper was instrumental in the Steele dossier ending up in the news on CNN.

Let me tell you that story briefly. January 6, 2017. Obama’s still in office. Trump has not been immaculated yet. They’ve got the Steele dossier. They’re desperate to get this thing in the news! They’re desperate to get it out there that Trump hired prostitutes to urinate on a bed Obama had slept in. So Comey and Brennan and Clapper have a meeting with Trump at Trump Tower on June 6th. At the end of the meeting, Comey says, “Look, I need to talk to the president about something,” and sends Clapper and Brennan out of the room.

At that point, Comey pulls out the dossier and says, “Mr. President, I know you said that you don’t like having intel briefings every day, but let me just show you why you should. This is the kind of stuff that’s out there, Mr. President” and he shows him one thing in the Steele dossier, the golden showers story. One thing. Comey… It was a setup. He was hoping to get some kind of Trump verbal response that they could then say was confirmation or something or other. But barring that — and Trump did not say anything that Comey could go out and quote.

So when Trump says, “It’s silly, this is crazy, it’s asinine. Why are you wasting my time with this?” Comey leaves and calls Clapper, who had just left the room moments ago. Comey calls Clapper and says, “Mission accomplished.” This is Comey’s own testimony of this before a congressional committee. He called Clapper and said, “Mission accomplished.” Clapper called CNN and told them the president had just been shown the details of the Steele dossier. That made the Steele dossier reportable. That meant that they could now report it.

It had been floating around Washington since the summer, but there was no way to use it because it was unverified, uncorroborated. It was all BS. But presenting it to the president makes it news. (impression) “The president has now seen the golden showers story from the Steele dossier!” So Clapper calls CNN; CNN runs with that story. “The president’s now aware! The president has seen it.” BuzzFeed takes the occasion to publish the entire dossier. Then CNN starts doing fake news and gets a Pulitzer Prize for reporting on Trump learning about the dossier.

They get a Pulitzer Prize from an orchestrated, coordinated plan for James Clapper — now, apparently following orders from Obama — to leak to CNN that Trump had been presented this story. That is one of the most glaring examples. There are countless stories like this throughout this sordid three-year period. But this is how they got the dossier in the news. The whistleblower is how they’re getting in the news that Trump lied to the Ukraine president — or not lied, but conspired to get Biden.

It might be a different game. It might be some other team that ran the play over and over when they find out the defense wasn’t prepared to stop it. But that’s what the Democrats are doing. They’re running the same play as Kavanaugh, Russian collusion. They’re making up some story — the Steele dossier, golden showers — and giving it to the media. The media reports it. In this case, the whistleblower calls Schiff, “I got this great thing! I can tell you what Trump said to the Ukrainian president!” It’s all made up. It’s all an ongoing illusion.

RUSH: I want to go back to this Clapper bite because, folks, this is a gigantic deal. This is a big deal. This is James Clapper admitting that what all happened during the Trump-Russia collusion thing was ordered by Barack Obama. Listen again. Sound bite number 10. 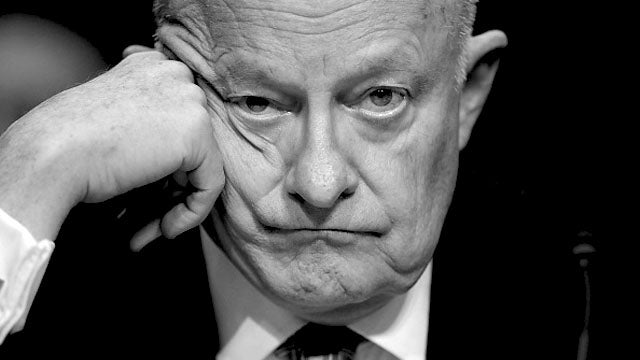 CLAPPER: The message I’m getting from all this is, apparently what we were supposed to have done was to ignore the Russian interference, ignore the Russian meddling and the threat that it poses to us, and oh, by the way, blown off what the then commander in chief, President Obama, told us to do, which was to assemble all the reporting that we could that we had available to us and put it in one report that the president could pass on to the Congress and to the next administration. And while we’re at it, declassify as much as we possibly could to make it public, and that’s what we did.

CLAPPER: It’s kind of disconcerting now to be investigated for, you know having done our duty and done what we were told to do by the president.

RUSH: I’ve been waiting for this. A lot of people have been waiting for this. Here’s Clapper saying, “I didn’t do anything wrong! We didn’t do anything wrong, ’cause we were doing what Obama told us to do.” The question he was asked is (summarized), “Are you worried about this investigation that Barr and he’s team’s running against you? Are you worried? You, Clapper and Brennan, are you guys worried?” (muttering) “Oh, no. Of course not. Why? (muttering) The president told us to do all that! (muttering) Obama was the president of the United States. Uhhh, the chief executive, uh, commander-in-chief told us to do all that.”

Folks, can you say in any other time and place “bombshell”?

Dairy Farmers Dump Thousands of Gallons of Milk Down the Drain as Economy Halts Due to Coronavirus
April 8th, 2020 Big League Politics

Ten Ways The World Will Change After The Great Coronavirus Shutdown Of 2020
April 8th, 2020 Clash Daily

Not Everyone in Government is Going Along With this Nazi-Like or Soviet-Style Propaganda – Good Government is Resisting!
April 8th, 2020 Sons of Liberty Media