As liberal morons celebrate a Trump supporter mailing bombs to Democrats, not so fast. Several very troubling things about this guy. Take our poll

We all know what careless losers Democrats are. Their incompetence and lack of attention to detail show in everything they do, like Barack Hussein’s birth certificate, a clear and very poorly-contrived fabrication that a pimply-faced teenager could have manufactured far better and cheaper in his parents’ basement.

And the Christine Blasey-Ford lie, invented to prevent a conservative, originalist interpreter of our Constitution from taking a seat on our nation’s highest court. It seems that if you were going to make an allegation where you cannot provide a time and place, you would at least manage to have one corroborating witness. Blasey-Ford had four, all of which declared that she is full of shit.

Come on, Democrats, you can do better than that. You are the kings and queens of corruption and dirty deeds. How could you overlook slipping a little payola to a few liars to swear that they were there and personally witnessed Kavanaugh ripping the clothes off of local skank, Blasey-Ford? I know you guys are pretty broke, but surely Uncle George can spot you a few million for an eyewitness or two. Very poor work!

Help us fight Facebook and keep the message alive by donating anything you can, and please share this link everywhere…. https://www.gofundme.com/powdered-wig-society 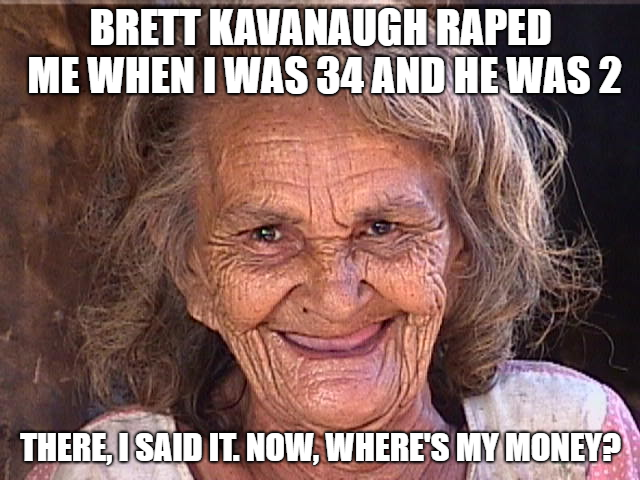 Now that the Kavanaugh sexual assault lie has crashed and burned and likely cost the Democrats many congressional seats, they have moved on.

The dirty deed du jour is mailbombing several high-profile liberal weenies, sure to incite the righteous indignation of the official Democrat Communications Division, aka the mainstream media, and rank and file liberal weenies from sea to shining sea.

And, right on cue, here they come, their brows vertically-furrowed in anger and lips a-flapping, describing President Trump as the most wicked individual to ever walk the face of the earth, for surely he is responsible for a nutjob with what appears to be a painted dome (why buy a rug when Rust-Oleum works just as well?), you know, like Chuck Schumer was responsible for Steve Scalise being shot by James Hodgkinson, who sucked at shooting fish in a barrel, and who wound up being the only fatality. Have I mentioned that Democrats suck at everything they do?

But, wait! Could this hapless assclown, Cesar Sayoc, identified as a DJ, pizza delivery dude, and raging Trump fan, be another Democrat plant? Nah, the Democrats would never do anything like that. Am I right?

I am not going to declare that Cesar Sayoc is anything but a moron who made it a cinch for the cops to catch him sending bombs to high-profile liberal weenies.

What I will declare is that there are several things about Sayoc and this latest, conveniently-timed event that I would describe as bizarre to impossible.

Sayoc is both a felon and a registered voter in Florida. Florida is arguably the toughest state in the union for felons to start a new life. They most certainly cannot vote in Florida. I believe that Sayoc has at least two felony convictions, but I know for certain that he has at least one, Grand Theft, which would disqualify him from voting.

“No person shall drive any motor vehicle with any sign, poster, or other non-transparent material upon the front windshield, sidewings, or side or rear windows of such vehicle which materially obstructs, obscures, or impairs the Driver’s clear view of the highway or any intersecting highway.”

Sayoc is a compulsive liar. Sayoc claims to be a Native American and a member of the Seminole tribe, which says it has absolutely no record of Sayoc, whose father is said to be Filippino and his mother Italian. His parents separated in 1972 when Sayoc was ten and he has lived with his mother ever since. He is a DJ and pizza delivery guy pushing 60. Sayoc has also claimed that he worked for the male stripper organization, The Chippendales, who emphatically deny that Sayoc has ever been a Chippendale. At best, Sayoc is a strange dude.

“Sayoc” may be an alias. There are now many corroborated reports that “Sayoc” is not his real last name, that his real name is Cesar Altieri Randazzo, which could explain how whoever Sayoc is is a registered Republican. There are many things unknown about whoever the individual in custody is.

So, at this point, we can still only guess who this Sayoc character is and what caused him to send 13 pipe bombs to prominent liberal Democrats. He could be a conservative Republican who hates liberals enough to want to kill them (personally, I believe there is near 0% chance of that). He could simply be a nutjob seeking his fifteen minutes of fame. He could be a patsy, set up by the Democrat Party to take the fall for a nefarious operation. Or, he could be a paid actor, hired to tarnish the reputations of President Trump and the Republican Party by claiming party affiliation with them to convince fence-sitting voters to vote Democrat on November 6.

Take our poll, below, to let us know who you believe Sayoc is based on what you know so far.

Help us fight Facebook and keep the message alive by donating anything you can, and please share this link everywhere…. https://www.gofundme.com/powdered-wig-society

Who is Cesar Sayoc?
Created with Poll Maker

Williamson Backs Bernie – Calls It Political Revolution But Revolutions Are Not Always In The Best Interest Of Citizens
February 24th, 2020 Sons of Liberty Media