We all know who the demon George Soros is and I’m sure the identities of the Silicon Valley financiers will be forthcoming. Do not be surprised if the major shareholders of social media giants are included in the group.

This bombshell revelation is found in a footnote on Page 113 of the newly released, heavily redacted House Intelligence Committee report on Russian interference in the 2016 US presidential election, and from November, 2016 testimony by Adam Waldman before the Senate Intelligence panel.

Soros and the Silicon Valley billionaires combining their resources with the DNC’s and Hillary Clinton’s to destroy President Trump is a conspiracy so vast and so powerful that only one force could have brought it down in my opinion – Divine Intervention.

The House Intel report also concluded that there was no collusion between President Trump and the Russians. So, why is Mueller still investigating it, Jeff Sessions?

A group of wealthy donors from New York and California have forked out $50 million to fund a Russia investigation being conducted by Christopher Steele, Fusion GPS and a former Senate staffer for Dianne Feinstein.

That bombshell revelation is made in a footnote to the House Intelligence Committee’s newly released report on Russian interference in the presidential campaign.

Fusion GPS hired Steele, a former MI6 agent, to investigate Trump’s activities in Russia. He would go on to produce a 35-page report alleging collusion between the Trump campaign and Russian government.

While the dossier project failed to help former Secretary of State Hillary Clinton win the presidency, Fusion GPS and Steele have continued their investigative work.

That’s according to statements from Daniel Jones, a former Feinstein staffer who runs the Penn Quarter Group (PQG), a Washington, D.C., consulting firm.

The House report states that in March 2017, Jones told the FBI about a project he is working on with Steele and Fusion GPS that is being funded to the tune of $50 million by 7 to 10 wealthy donors from New York and California.

“In late March 2017, Jones met with FBI regarding PQG, which he described as ‘exposing foreign influence in Western election,’” reads the committee’s report.

“[Redacted] told FBI that PQG was being funded by 7 to 10 wealthy donors located primarily in New York and California, who provided approximately $50 million.”

I believe the efforts of this anti-Trump cabal is clearly setitious conspiracy, punishable by up to 20 years in prison per count….

“[Redacted] further stated that PQG had secured the services of Steele, his associate [redacted], and Fusion GPS to continue exposing Russian interference in the 2016 U.S. Presidential election,” reads the report, which adds that Jones “planned to share the information he obtained with policymakers…and with the press.”

The report cites a transcript of an interview that Jones gave to the FBI. The transcript, known as an FD-302, is dated March 28, 2017.

The report confirms recent reporting about Jones’ work with Fusion and Steele. The Federalist first reported on Feb. 20 that evidence suggested Jones was working with Fusion.

Jones’ name first emerged in connection with the Russia probe in February after Fox News published a batch of text messages exchanged between Virginia Sen. Mark Warner and Adam Waldman, a lawyer for Oleg Deripaska, a Russian oligarch who is under scrutiny in the Russia probe.

The texts show that Waldman was working as a backchannel between Steele and Warner. Waldman referred to Jones in two exchanges with Warner, who sought to meet with Steele separate from the rest of the Senate Intel panel.

According to text messages seen exclusively by TheDCNF, Jones first contacted Waldman on March 15, 2017, saying that he was with a non-profit group that had just been formed in Washington, D.C. 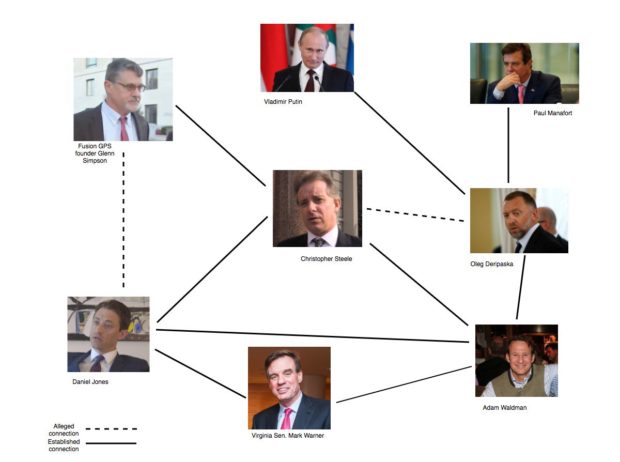 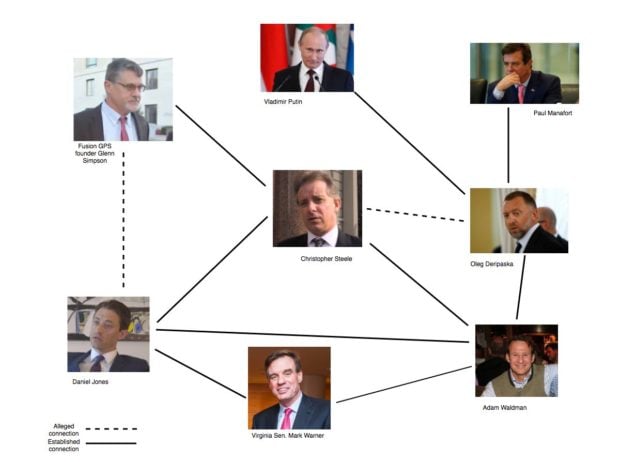 During that meeting, Waldman says that Jones revealed that he was working with Fusion GPS. Jones also said that a “group of Silicon Valley billionaires and George Soros” were funding the project with Fusion GPS, according to Waldman, who testified to the Senate Intelligence panel on Nov. 3

The subject footnote can be found on Page 113 in the House Intelligence Committee’s newly released report at the following link…. Bombshell footnote!