VIDEO: Creepy Uncle Joe called President Trump’s “lynching” remark racist, ‘abhorrent,’ and ‘despicable.’ But watch what he himself said in 1998

So, creepy Uncle Joe thought the term “lynching” was fine when he used it to describe Republicans rightfully impeaching Slick Willie for lying under oath. But, now that President Trump has used the term to accurately describe the horrendous injustice underway today in the US House of Representatives, it is suddenly racist and “abhorrent” and “despicable.”

The first tweet, below, is President Trump’s tweet which has created an uproar among Democrats and their official mouthpieces in the mainstream media. It is followed by the 1998 video of Senator Touchy Feely moaning to CNN’s Wolf Blitzer that Bill Clinton’s impeachment for lying under oath was a “partisan lynching.”

So some day, if a Democrat becomes President and the Republicans win the House, even by a tiny margin, they can impeach the President, without due process or fairness or any legal rights. All Republicans must remember what they are witnessing here – a lynching. But we will WIN!

The Democrats believe they are above the law.

They don’t understand the blowback will be quite damaging.

They won’t like it when they’re on the receiving end.

Oh and they will be!

Bwahaaaahaaaahaaaaa! Creepy Uncle Joe claims that his use of the term was an accident, but President Trump used the word deliberately. So, in Creepyjoeworld, it's OK to scream the N word in a black church as long as you claim it was an accident. You just can't make this stuff up!

The following liberal weenie blocked me after I replied to her ignorant tweet, so I screenshot it for posterity…. 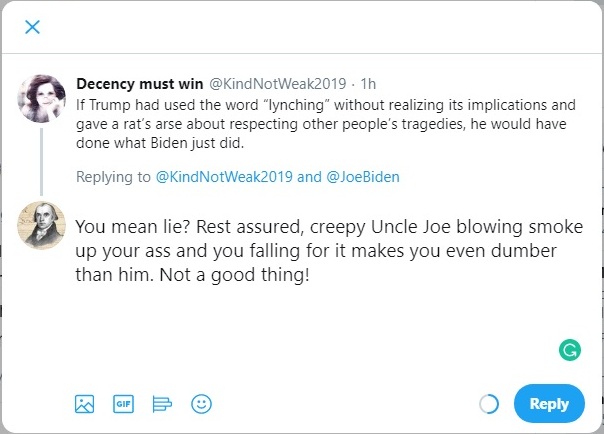 New Incriminating Crossfire Hurricane Details Show Up, ‘Trump Was Right’ — And It Gets Worse
September 24th, 2020 Clash Daily
Send this to a friend